Nigel Thomas' latest album is 'Well Well', an album that harks back five decades to the sound of the experimental sixties mixed with elements of jazz. At its best during its more energetic first-half, it has echoes of The Beatles, alongside Franz Ferdinand's more recent albums, in its eclectic, often light-psychedelic sound. 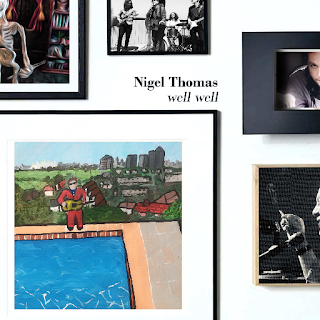 Opener Rita is a perky, jazz-infused, off-kilter number dedicated to the titular lady. With a heady mixture of instruments, ragga piano and harmonica, it has the feel of a high-energy performance in a jazz club and you can almost picture Ryan Gosling bouncing along in a theoretical sequel to ‘La La Land’. Stepping Up continues the energy of the LP, offering up a quirky catchy number with some smooth instrumental solos, and a huge pop feel. With shades of Squeeze but more off-the-wall, it’s hard to listen to it without a smile on your face.

I’ve Seen Forever is a slower number with one ear towards the indie ballads of the early Kaiser Chiefs albums or the Hoosiers mixed in with the psychedelia of the Beatles whilst
Your Fire, the highlight of the album for me, proves to be an upbeat and energetic number that bounces along with plenty of energy. It employs driving guitars, a catchy chorus, shifts in style and some nursery rhyming interpolated into the lyrics. Your Fire throws a lot at the wall but most of it sticks.

The title track Well Well is a more somnambulant number that ebbs and flows in a manner that Pink Floyd would be proud of whilst Alchemy Rose, a darker song in tone, is more focused on the guitar, with a 70s rock vibe at times, like a light Status Quo meets Franz Ferdinand.

I’ve Been Thinking continues with the theme of the guitar, this time going all Jimi Hendrix with its darker vibe. Its repetitive chorus will hook you in.

Spinning (Flat Earth Theory) is my least favourite on the album and it knocks things down a notch, though does it in a cool manner. It just lacks the spark of some of the earlier tracks.
Settle Down, which begins with the sound of a crackling fire permeating the background, is a dark and introspective number, and keeps the mood moving, before closer Smiling and Laughing lifts the album once more with an eccentric pop song, that sounds like a modern George Formby if he discovered more credible pop music.

Overall Well Well is another strong album from Nigel Thomas. At its best when its upbeat and catchy, the mix of crisp production, jazz and Beatles-like vibes work really well.