Eurovision You Decide: Our Thoughts

It's that time of year when the BBC reveals the six entries for this year's Eurovision You Decide, with one being picked to represent the UK, this year in Israel. With the songs now released to the public online and on BBC Radio 2, we've taken a listen and given our verdicts below, plus which we think is our favourite.

What do you think of this year's selection? Does the concept of having two different takes of three songs work? Who do you think should be picked? Will the first post-Brexit Eurovision be awful for us? Let us know in the comments section below! 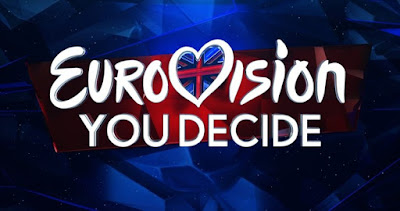 The first of the three songs, this is lyrically simple but that's never been a problem for a Eurovision song. Here we have two distinctively different versions: a souped-up club version, and a stripped-back candle-light version.

Kerrie-Anne: The Soulful One

The clubbiest of the six tracks this is arguably the most commercial of the tracks, and could be easily ripped out of the charts with its familiar bridge build up and drum machine loops. Could that make it a little bit too credible for Eurovision? In my opinion the production is populist but also a little bland, and it could be any club-pop song from 2000 onwards.

Verdict: It has the commercial vibe and a catchy hook, and Kerrie-Anne has a strong soulful voice, but its production is a little familiar and forgettable. (6.5/10)

Anisa: The Mariah Carey One

Drastically slowly down the tempo for this take on it, this is much more Eurovision in its style. Anisa has a strong voice but her vocal style, with its wobbling element of fragility, is not to my particular taste. With its slow style it's much closer to X-Factor in its style but it fails to build to any sort of crescendo.

Verdict: The song works well in both versions and it's difficult to pick between them, but I would have to plump for the faster version as I'm not a big fan of Mariah Carey-style vocal trickery. (6/10)

Two very different takes of the track here, but back memorable in their own distinctive ways.

Holly Tandy: The Country One

The country-tinged entry which ticks a box from me for my own personal taste. Holly's voice is powerful without being too over the top and it has enough of a hook to work, though it does run out of any ideas other than saying the word 'bigger' in different ways.

Verdict: I enjoy the country vibe, with echoes of Kylie Minogue's foray into the genre, but it lacks enough in the second half to keep you interested. (7/10)

Michael Rice: The X-Factor One

This second take on the song is much more stripped back, going back to a solo piano for the start and is, like I mentioned above on the first song, turns it into more of an X-Factor winner. Rice's 'Sam Smith' style vocals work well and there's plenty of heart in the song.

Verdict: With a key change and a soaring chorus this is definitely in reality television territory. A strong version but I prefer the style of the other version over this overly-familiar take. (6/10)

As noted online, there's a distinct 'Canon in D' vibe to the production of both tracks. I really like this song though it's rather downbeat lyrics aren't quite Eurovision, and I'm not sure going into a post-Brexit Eurovision with a song that could easily be twisted in headlines to be reflective on the UK's European motivations is a wise idea. Also I'm not sure how well they will translate to the stage as both are rather production-heavy.

Jordan Clarke: The Poppy, Well-Produced One

I'm going to paint my colours to the mast and say this is the poppiest entry on the list. With its mid-tempo swagger delivery and Rizzle Kicks-style production this has the most variety in style, though it feels like the cheesiest entry on the list but it doesn't quite commit completely to the Eurovision campness. Though I'm not sure how you can make rhyming 'locker' and 'soccer' sound so weird.

Verdict: My poppier side is won over by this version, as it feels instantly memorable. Eurovision is pretty camp (obviously) and this is almost ticking that box. (7/10)

MAID - The Little Mix One

Channeling the popular girl group, it's not a huge departure from Clarke's take, but the production box has definitely been cranked up for this version, with the bass-heavy soundtrack from Interstellar thrown in for good measure. It feels like the version where they're throwing lots of things at the wall in the hope that something sticks.

It's a difficult one as each one is good in a different way (there's a cop-out statement if ever there was one), but if I had to settle on a decision I'd go for Holly Tandy as my personal preference musically, but I'd go with Jordan Clarke as our best chance. Even though it's quite studio-focused it's catchy, upbeat and fun, which is everything Eurovision is about, though lyrically it's neither outrageously cheesy nor straight-faced.

Not that it matters, as we'll still be at the bottom!
Posted by Philip Lickley at 17:04 No comments: