Nigel Thomas is a London-based musician who has released his debut album ‘Travelling Man’ this year featuring track ‘Fever’ which we have previously talked about. As well as being a solo musician Nigel Thomas has also previously been part of band The Foxes as well as being involved with television work including shows on the Discovery Channel, National Geographic and KBNE-UK. He also appeared in the music video for Rizzle Kicks’ signature tune ‘Skip to the Good Bit’.

In a chat to us about the album Nigel told us about ‘Travelling Man’, which he described as an eclectic mix of styles and subject matters, spanning from your traditional love songs to tracks about mental health to even ‘Ghosthunter’ which talks about false mediums and clairvoyants. One track ‘Destiny’, covers thoughts on whether we control our own destiny. 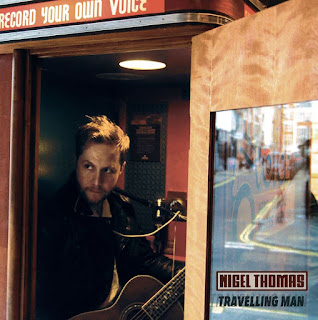 “There is a mixture of styles in the music as well. There’s heavier guitar tracks on there like ‘Ghosthunter’ for example but there’s a track called ‘Drift’, with gentle guitars and a whole wash of a string quarter in there. ‘Dancing’ starts with just a harp and vocals so there’s a whole range of stuff.”

‘Travelling Man’, thematically, is based on the most recent few years of Thomas’ life and things he’s been through. “There’s happiness, there’s joy. I don’t know if I’ve started thinking of broader subject matters, which maybe you do as you get older and stop being obsessed with love in your writing. I think it definitely shows and it’s a good thing to broaden your song writing horizon.

“It’s great writing a three-minute pop song on love as it’s something everyone can relate to but then you start branching out and writing on other topics.”

The album was launched on the 12th March at a special party in the Barfly at Camden, an event Nigel Thomas really enjoyed, joining with band the Lazlo Device.

Delving into ‘Ghosthunter’, inspiration for that track came from Thomas’ reading of Derren Brown books and late nights watching clairvoyant shows on television. “They use the excuse that they’re giving people hope when they’re distraught, that your loved one is still thinking of you, and I think that’s a bit of a weak excuse that the Ghosthunter gives in the song. It is false hope in the end and it is misleading people and taking advantage of their grief. In the end it’s just about taking money from people by manipulating them.”

On the subject of the artwork for the album, taken in a ‘Record Your Own Voice Box’, Nigel revealed it was never intended to be the album cover. “I was with my friend Chris PresswelL [director of some of Thomas’ videos] and he let me know it was one of only two working ‘Record Your Own Voice’ boxes left in the world; one is in Memphis, and the other has just been repaired and is doing a little tour of places. That was outside Phoenix Records on Poland Street, just off Oxford Circus, and it was sponsored by a whiskey company who asked me to have a whiskey and go in and record two minutes of something to vinyl.

“I did that and I was just getting ready to play and he snapped that photo. It just ended up being the best one for the cover, like that was the one!”

Having completed a version of ‘Fever’ in the booth, which was rendered out in an old-fashioned 1920s lo-fi style according to Thomas, he suggested it may resurface at some point as a future bonus track.
On the other end of the modern scale, Nigel has also been involved in a very futuristic style of music video creation, with his track ‘Que Sera’ having an accompanying 360-degree video, basically a promotional video you can control and watch from any angle. Though a few artists have done this it’s the first from an independent artist, directed by Chris Presswell. You can watch the video now on YouTube.

“It’s going to be something that will get more popular so I thought I’d get in early!”

With the album under his belt, Nigel Thomas is preparing for some more live dates including a music festival in Liverpool and more festivals in the summer, but with one eye on future material.

“I’ve been constantly writing, I’ve got a huge batch of songs, and I want to go into the studio again this year and hopefully have a follow-up about the same time next year.”

Before Nigel Thomas headed off we asked him about the title and where he’d travel if he could.


“I’d quite like to go to one of the most isolated places in Northern Russia just because I’ve been looking at the maps recently and it’s such a vast country and isolated, and to speak to people there. Especially after living in London it would be great to speak to them about their lives and living in such a remote, cold and distant place and learn something more about their culture.”

This interview will feature in KBPS #9 available Saturday 14th May.
Posted by Philip Lickley at 09:00